Occasionally you’ll find mounds of mulch on the floor of Mechanical and Aerospace Engineering Professor Ayonga Hereid’s lab. It’s not a landscaping mishap. Rather, the mulch mounds are placed intentionally to pose learning opportunities for a very special resident of the lab, a bipedal robot that Hereid and his five graduate research associates call Digit.

Manufactured by Agility Robotics, the robot arrived to Hereid’s Cyberbotics Lab in August 2020. Despite pandemic restrictions, he and his team have spent nearly a year programming its on-board locomotion controller. This controller learns in simulation how to move the robot’s many joints in a synchronized way to achieve stable walking motion over difficult, uneven terrains. Thanks to the specific learning framework that Hereid and his team developed, the simulation lessons can be seamlessly transferred to the actual robot.

“With the learned controller, Digit can respond to different locomotion commands, such as walking, climbing stairs and turning, without falling,” Hereid said.

The Cyberbotics Lab team has posted several videos of their programming progress, showing Digit walking in all directions, using reinforcement learning, and reacting to small disturbances, like a push. Digit and the team also have taken a couple strolls on campus to experiment with inclines, like the sidewalk at the Garden of Constants. 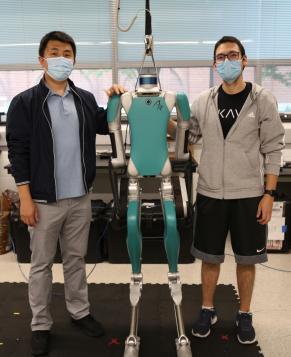 This is the only bipedal robotics lab at The Ohio State University, but Hereid brings a wealth of experience in the field. He received his doctorate from the Georgia Institute of Technology in 2016 under the supervision of Professor Aaron Ames, now the Bren Professor of Mechanical and Civil Engineering and Control and Dynamical Systems at the California Institute of Technology. From 2017 to 2019, he was a postdoctoral research fellow at the University of Michigan in Ann Arbor, working with Professor Jessy Grizzle. Ames and Grizzle are widely recognized leaders in the field of bipedal robotics, particularly renowned for developing advanced control theories for walking robots and medical assistive devices.

Over the next year, Hereid’s goal is to program Digit to begin operating autonomously in a real-world environment to perform tasks amidst humans, not unlike the Yandex wheeled robots delivering carryout on campus. In fact, he said that his team is working on several proposals for funding to prepare Digit for logistics work environment tasks, like a warehouse for instance. The team is also interested in helping industry partners learn how bipedal robots could be integrated into their operations.

This article originally appeared on engineering.osu.edu on 10/11/21.

Preparing the nation for drones carrying cargo and people