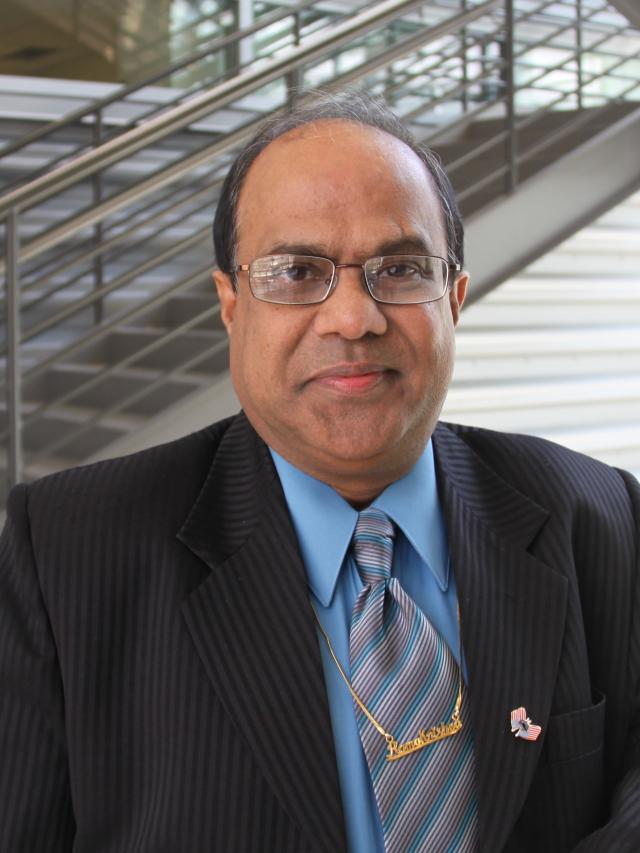 Dr. Yedavalli is currently a Professor as well as the Director of the Distributed Engine Control and Simulation Laboratory in the Department of Mechanical and Aerospace Engineering at the Ohio State University, Columbus, OH.  He received his Ph.D degree from the School of Aeronautics and Astronautics of Purdue University in the Dynamics and Control area in 1981 with majority of his professorial career being in the department of Aerospace Engineering at Ohio State. His Bachelor’s degree was in Electrical Technology and the Master’s degree was in Aerospace Engineering, both from the Indian Institute of Science, Bangalore, India.

Dr. Yedavalli is a Fellow of IEEE, a Fellow of ASME, a Fellow of AAAS and an Associate Fellow of AIAA.  He held the Satish Dhawan Chaired Professorship during his sabbatical at the invitation of his alma mater the Indian Institute of Science in 2018 and was subsequently awarded the Platinum Jubilee Award, given to highly select Alumni of the department of Aerospace Engineering of the Institute during its Platinum Jublee celebrations in 2018. Prior to these, he received the `Distinguished Alumnus Award’ from the Indian Institute of Science in 2009. He received the O.Hugo Schuck Best Paper award from the American Automatic Control Council in 2001. In 2002, he also received the `Lumley Research Award’ by the Ohio State University’s College of Engineering. He is a member of the International Who's Who of Professionals as well as Marquis Who's Who on America.

He served as the Chair of the Technical Program Committee for the 2015 ASME Dynamic Systems Control Conference. He currently serves as a member of the Honors and Awards Committee of the ASME Dynamic Systems and Control Division (DSCD) in charge of selecting candidates for high profile awards such as the Oldenberger Medal, Paynter Award and Kalman Best Paper awards etc. He was the Society Review Chair for AIAA for the American Control Conference for 2015. He was an Associate Editor for the ASME Journal of Dynamic Systems, Measurement and Control (2006-2013) as well as the International Journal of Systems Science (1992- 2012). He is also a member of the Conference Editorial Board (CEB) for IEEE and ASME. He co-edited an IEEE Press Book on "Recent Advances in Robust Control" in 1990 which enjoys high citation in many research papers. He also served as an Associate Editor for the AIAA Journal of Guidance, Control and Dynamics (1992-95). He was the Chairman of the Technical Program Committee for the 1991 AIAA Guidance, Navigation and Control Conference held in New Orleans, LA.  He offered tutorial workshops on "Robust Control" at the 1992 IEEE Conference on Decision and Control and the AIAA GNC Conference and for Ohio Aerospace Institute. He was a member of the technical program committees for the 1992 American Control Conference and IEEE Conference on Control Applications. He served as the Society Review Chairman for the 1993 ACC. He served as a member of the AIAA Technical Committee on Guidance, Navigation and Control during 1989-1992.  He is a member of the IFAC working Group on "Robust Control" and was  a member of the IEEE working group on Linear Multivariable Systems. He organized, chaired and co-chaired  (and continues to do so) various technical sessions in conferences such as ACC, CDC, CCA and AIAA GNC. He serves as a reviewer for many journals , conferences and NSF (including being a member of  different Panels for NSF and ONR). He served as a "Guest Editor" for a special issue in the Journal  of "Mathematical Problems in Engineering" . He was a consultant to the Lawrence Livermore National Laboratory for two years.

With the support of his extensive sponsored research, Dr. Yedavalli graduated several Master’s and Ph.D students (including a Post Doctoral researcher) who are all well placed professionally (at Industries like GM, Boeing, P&W and Universities like Cal State, Long Beach). One of his Ph.D graduates, Dr. Praveen Shankar, during his Ph.D tenure with Dr. Yedavalli, upon his nomination, won the prestigious AIAA Foundation’s Orville Wright Graduate Student Award in 2006. Another Ph.D graduate, Dr. Rohit Belapurkar (Ph.D, Autumn 2012) was the Winner of few AIAA Student Best paper awards and recently Grand Prize Winner in the AIAA New Horizons Contest, along with the Best Reviewer award by the International Journal of Systems Science and recipient of an ASME IGTI Scholarship. Another Ph.D graduate Dr. Nagini Devarakonda (Ph.D, Summer 2011) was a semi-finalist in the Student Best paper award contest in the American Control Conference as well as Best Session Presentation award, and was a winner of the Outstanding Achievement award by the WIE section at OSU. His former Masters' thesis advisee, Ms. Sampriti Bhattacharyya completed her doctoral degree at MIT and she was selected as one of the Forbes Under 30 innovators.

Recently, the paper: R.K.Yedavalli, R.K.Belapurkar: “Application of Wireless Sensor Networks to Aircraft Control and Health Management Systems”, Journal of Control Theory and Applications, Special Issue: “Wireless Sensor Networks: from Theory to Practice”, Vol. 9, No.1, pp. 28-33, February 2011, was declared as the Top 5 Downloads of that journal.

He carried out research for Small Businesses under the SBIR/STTR route. His entrepreneurship efforts include serving as the President of  "Robust Engineering Systems, LLC"  which carried out research as a subcontractor for few projects from Air Force and AFRL. His expertise on control systems design, flight vehicle autopilot design and robust control systems design are sought by various Industries.