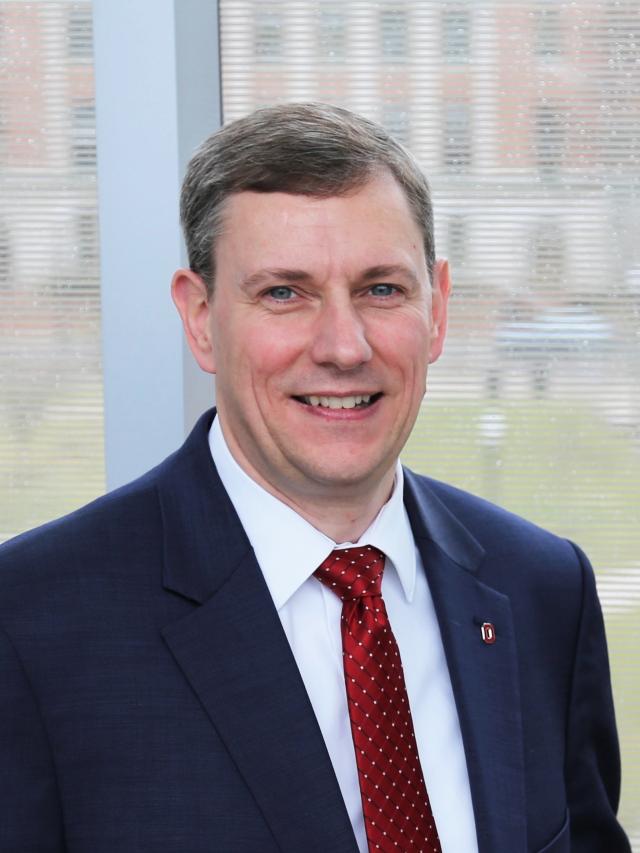 Dr. James W. Gregory is Professor and Chair of the Department of Mechanical and Aerospace Engineering (MAE) at The Ohio State University.  He received his doctorate and masters degrees in Aeronautics and Astronautics from Purdue University in 2005 and 2002, respectively, and his Bachelor of Aerospace Engineering from Georgia Tech in 1999, graduating with highest honors.  He has been a faculty member at Ohio State since 2008 (Assistant Prof 2008-13, Associate Prof 2013-2017, Full Prof 2017-present), served as Director of the Aerospace Research Center from 2017-2020, and is currently department chair of MAE (2020 – present).  Dr. Gregory is an Associate Fellow of AIAA.

The Department is home to academic programs in Mechanical, Aerospace, and Nuclear engineering, with about 80 faculty and 30 staff educating and serving about 1700 undergraduate and 340 graduate students.  As Chair of MAE, Dr. Gregory is responsible for oversight of a $16M operational budget and facilities in the 262,000-square foot Scott Laboratory, with annual research expenditures of about $26M.

Prior to Chairing MAE, Dr. Gregory was Director of the Aerospace Research Center, where he expanded interdisciplinary collaborations to include colleagues from aerospace engineering, industrial engineering, electrical engineering, mechanical engineering, and medicine.  The Center grew to include engagement from over 15 faculty, approximately 50 students, 6 research staff, and 7 support staff.  Under Dr. Gregory’s leadership, the Center’s research expenditures grew from $2.8M in FY17 to $7.7M in FY20.

Dr. Gregory’s research interests lie at the intersection of Unmanned Aircraft Systems (drones) and unsteady aerodynamics, including flight testing of vehicle performance, systems integration studies, robust flight of UAS in all weather conditions (wind and icing), unsteady airfoil loading, and low-Reynolds number rotor wake studies.  Funding for his work since 2008 has totaled over $20M, including grants from ARO (Young Investigator Award), ARL, AFOSR, AFRL, FAA, NASA, Sikorsky, Honda R&D, the Ohio Federal Research Network, and the Ohio Department of Transportation.  Dr. Gregory serves as PI for Ohio State as a core member of the ASSURE FAA Center of Excellence on Integrating UAS in the National Airspace System, and is lead PI for the Ohio Department of Transportation’s $6.9M Unmanned Aircraft Traffic Management (UTM) system.  His research has resulted in the Thomas Hawksley Gold Medal, a best paper award presented by the Institution of Mechanical Engineers (IMechE) across all of their journals; and the Alfred Gessow Award for co-author of the Best Paper at the 68th American Helicopter Society Forum.  Dr. Gregory also led a team of researchers and students to set official world records for speed and distance for an autonomous drone in August 2017 (sanctioned by NAA and FAI, and reported on in Aviation Week magazine).

Dr. Gregory’s teaching innovations have led to the NAA Frank G. Brewer Trophy, which honors significant contributions of enduring value to aerospace education in the United States.  He has also been recognized with the College of Engineering’s McCarthy Engineering Teaching Award, the Department of Aerospace Engineering Outstanding Professor Award, and the SAE Ralph R. Teetor Educational Award.  He has produced a video lecture series on the Science of Flight, in collaboration with the Great Courses and the Smithsonian Institution’s Air & Space Museum.  This video course, with 24 half-hour lectures, has sold over 14,000 copies with an additional 25,000 hours of online streaming since June 2017.  Dr. Gregory has also made his own video recordings of his Introduction to Aerospace Engineering course, and has used these to “flip” the classroom in this large, sophomore-level course, leading to a full letter grade improvement in the class average.  He has also developed a number of innovative design projects and labs including an international collaboration for aerial detection of buried landmines, high-altitude balloon launch, analysis of US Airways flight 1549 flight recorder data, glider design/build/fly, and airfoil design/build/test using rapid prototyping.

Dr. Gregory’s work experience includes stints at the US Air Force Research Laboratory Air Vehicles Directorate, Delta Air Lines, NASA Glenn Research Center, Tohoku University in Japan, and as a Fulbright Scholar at the Technion in Israel. He has also served as a policy fellow at the National Academy of Engineering through the Christine Mirzayan Science & Technology Policy Fellowship. He also completed a postdoctoral fellowship at the U.S. Air Force Academy, funded through the National Research Council Research Associateship Program. He is an instrument rated private pilot, with over 370 flight hours in single-engine aircraft, and is one of the first holders of a remote pilot certificate under part 107.