Adithya Ramaswami and Jack Murray, both undergraduate aerospace engineering students graduating in May 2023, had seen each other in classes before, but the first time they really interacted was working on the leadership board of the American Institute of Aeronautics and Astronautics (AIAA) Ohio State student chapter in the 2020 autumn semester.

On the board, they became fast friends and began discussing their interests in the aerospace world. Ramaswami had just recently launched Ohio State’s first drone competition team, Buckeye Vertical, and would often share with Murray all the variety and opportunity that the drone industry had to offer.

Murray’s interest was piqued, he decided to pursue internships within the drone space, and with a connection from Ramaswami, he found an offer for the summer of 2021 with ResCon Technologies through the Ohio State Keenan Center for Entrepreneurship’s Wheeler and Wolstein Internship Program.

While at ResCon, Murray was able to work in a fast-paced, start-up environment where he learned about all aspects of drone tech from the design and assembly to software control. Once the internship ended, he went looking for his next opportunity in autumn 2021 but couldn’t find anything through the Keenan Center’s Wolstein program.

The leadership within the Keenan Center all kept telling Murray the same thing about a new opportunity being offered through the university, “pursue the President’s Buckeye Accelerator”.  Murray looked into it and found an opportunity to launch a business with a variety of university-backed resources and a chance of winning additional funding through Ohio State.

So, one night in October 2021, Murray approached Ramaswami with a vague idea for a drone company and asked if Ramaswami had heard of the President’s Buckeye Accelerator.

“I have been following Dean Howard's emails and I have seen this opportunity,” Ramaswami had told Murray. “We should go for it together.”

With a November proposal deadline fast approaching, Ramaswami and Murray quickly put together their video pitch for a drone company for light and flight shows and sent it in. Later that year, they were informed that they were selected for the program’s Boost Camp, which began in January 2022.

Through the first-ever cohort of the President’s Buckeye Accelerator program, Adithya Ramaswami and Jack Murray launched ParaWave, a start-up focused on creating drones for first responders to help out during emergencies, in February 2022.

“We wanted to take our passion for the drone space and find a way to help the community and do something that was meaningful with that,” Ramaswami said. “It's thrilling, but it also feels like it's just the perfect amalgamation of everything happening at once. We're coming in at just the right time with just the right experience and just the right background for it.”

Accelerator applicants first must complete a six-week Boost Camp, and then 10 student ventures from the camp will have the chance to present at a pitch finale. Six start-ups are then selected for the year-long accelerator and $50,000 in funding.

The six-week Boost Camp is all about getting advice and validating the start-up idea to build into a business model that can be pitched at the pitch finale.

When Boost Camp started, Ramaswami and Murray quickly realized that light shows using drones may be hard to launch as a business, so they began to brainstorm. Knowing they had to pivot, they decided they wanted to help people most of all, so they switched their focus to helping firefighters during emergencies. 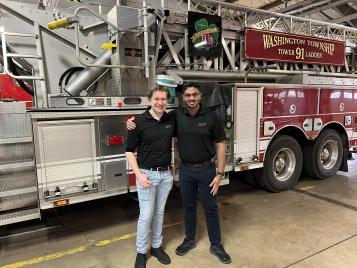 With a concrete idea and new name, FireFight Aero, the duo began to flesh out their business model, conduct customer interviews and work with local departments, all to understand the drone technology that their market most needed."

The first time they felt their idea was validated was during a meeting with the director of Franklin County Emergency Management and Homeland Security where they left with a letter of support for their business.

“That was the first time that we had gone out and interviewed a potential customer, so we were excited to see such an immediate positive reaction,” Murray said. “We thought that it would take more time to get our first letter of support, but we got it immediately. For us, that showed that the market had a really screaming need for this kind of technology.”

After conducting more interviews with departments across Franklin County, Ramaswami and Murray, with some advice from different department leaders, expanded their business model to include all first responders and made the final name change to ParaWave.

They came to a finalized business goal: to be the one-stop shop providing first responders with all their drone-related needs to view aerial footage and gather critical information during emergencies.

At the end of Boost Camp and now with a solid pitch in place, the leaders of ParaWave presented to a panel of four judges and some leadership of the Buckeye Accelerator. With their pitch going well, they were selected as one of 10 finalists to present at the pitch finale on April 6 for the opportunity to be part of the first cohort.

After tying up any loose ends and polishing their pitch, Ramaswami and Murray gave their final pitch in front of hundreds at 99P Labs on West Campus, and as the event came to an end, it was announced that they were chosen as one of the final six and were admitted to Cohort 1 of the President’s Buckeye Accelerator.

“It's just surreal and it still feels surreal.” Ramaswami said. “I'm like, wow, this is happening. It's so exciting to be able to take my passion in the drone space and be able to have the opportunity to do this. We're also just grateful for all the resources that [the university] has provided for us to be able to do this as well.” 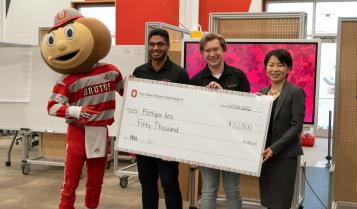 “There have been so many different key milestones that have been hit since then, and with every single one, I feel like I've had to take a step back and remember how real everything has suddenly become. For example, when we got accepted into the President’s Buckeye Accelerator program, when we were announced as winners to become part of the first cohort and receive $50,000 in funding: those experiences were surreal,” Murray said. "It's like everything is actually happening, and that feeling continues to happen more and more often."

ParaWave has since gone on to work with multiple accelerator programs. Through the CodeLaunch Accelerator during the summer of 2022, they partnered with a local software firm to prototype a mobile app to securely share live drone video feeds with teams of first responders. Additionally, they were able to present at an event put on by CodeLaunch Ohio at the Ohio Theater in front of an audience of over 500 people. 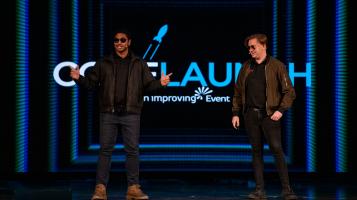 More recently, they became part of the VentureWell E-Teams program in January of 2023, where they worked to further develop their technology commercialization strategy and received an additional $5,000 in funding. They are currently applying for phase 2 of the E-teams program for $20,000 more in funding.

As part of the cohort, the two founders of ParaWave both spent the summer continuing to build out the company and creating the structure of their business all while juggling the normal activities of an undergraduate engineering student: internships, research and clubs.

As of now, both Ramaswami and Murray are finishing up their final year of undergraduate education all while running their business and are able to keep ParaWave and Ohio State close by hosting capstone opportunities through their start-up.

With most students thinking about what their next step after college is going to be, Ramaswami and Murray find themselves in a position they are grateful for. They both hope ParaWave can continue to grow with them throughout their professional careers and possibly into graduate school.

“Once we solidify the tech and we start providing this drone technology to departments in Franklin County, we plan to expand to the rest of Ohio and then hopefully the rest of the United States as well,” Ramaswami said, “but that'll take a few years.”

From Ohio State to Mars