When Maya Sivakumaran first heard about the 2022 Gateways to Blue Skies: Airports of Tomorrow Competition in October, the initial notice of intent to participate was due in two days.

Nevertheless, she was determined to compete.

“I was drawn to the competition since it combined two major interests of mine: sustainability and aerospace,” Sivakumaran said. “Honestly, the criteria and structure of the competition reminded me of some of my favorite memories from high school engineering competitions and I really wanted to experience that excitement again.”

She reached out to her friends that she had met within the aerospace engineering program at Ohio State and asked anyone if they would be willing to compete with her.

With an overwhelmingly positive response and after a bit of convincing for an uncertain few, she had her team. They put in their notice to compete and got to work.

Now, that team of Ohio State aerospace engineering second years has been selected as one of eight finalists from across the country for NASA's Aeronautics Research Mission Directorate’s (ARMD) 2022 Gateways to Blue Skies: Airports of Tomorrow (Blue Skies) Competition.

“All in all, I never expected to advance this far and be recognized by NASA for our work. This just makes me even more proud of everything my friends and I have accomplished, entirely of our own initiative and in our free time,” Sivakumaran said. “I have learned an immense amount about not only the aviation industry, but also about what it’s like to seek out information and industry connections to accomplish a specific goal. This competition has made me realize the scale of my capabilities outside of my university classes and has really inspired me to take advantage of the large pool of knowledge I have exposure to as an Ohio State student, right now.”

As the aviation industry moves into the future of Zero Emission Aviation by 2050, planes and airports of today will be vastly different in tomorrow’s landscape, the NASA press release states. The Blue Skies competition is a new event that seeks to inspire the incoming generation of engineers, planners, architects and other related disciplines to conceptualize changes to new airport designs or airport overhauls to ensure technology changes in the air go hand-in-hand with infrastructure changes on the ground.

To reach the objective of designing an airport suitable for the aviation of 2050, the Project ECOAir team began by researching what the current technology that is in use and being developed is. From there, they began brainstorming all the ways this technology could be put in use and built upon to conceptualize what an airport of 2050 would look like.

“Several factors went into this concept, such as the planes that will be available then, new technology, increase in air transportation population-wise, carbon emissions, the location of the airport,” Herrmann said. “A lot of it involved us defining our idea of the 2050 aviation landscape and building our design off of that.”

After getting a general grasp of what future capabilities realistically are, the team reached out to professionals and university faculty in aerospace engineering classes and at a variety of airports.

“Their guidance was immensely beneficial for understanding airport processes and the current scope of the aviation industry, as well as for gaining a variety of opinions on what the future might look like,” Sivakumaran said.

After gathering all of this information and insight, the team began designing their airport which ended up including hydrogen and bio-fueling systems, electric charging stations, and increased gate-runway mobility. They also implemented sustainable airport technologies, such as electric taxiing vehicles, carbon-friendly building materials, and the implementation of solar panels and wind turbines, to create the most efficient airport they could conceive.

To submit their project and ideas, the team created a technical paper, infographic, and video that explains their research and airport design.

The group was advised by members of the Battelle Center for Science, Engineering and Public Policy Ethan Rivera and Dr. Elizabeth Newton. They also received guidance and direction from department of mechanical and aerospace engineering faculty Dr. Brian Ritchie, Dr. Ali Jhemi, and Dr. John Horack who helped make connections with industry personnel with specialized knowledge in areas they were looking to improve.

The Battelle Center also helped the ECOAir team by providing a place to meet up, brainstorm, set up meetings via video or phone calls and even just a place to rest after a long day of classes, studying, and working on this project.

Finalist teams received $6,000 stipends to facilitate full participation in the competition, including presenting their design concepts at the 2022 Blue Skies Forum, which will be livestreamed globally. Winning team members earn a chance to intern at one of NASA’s Aeronautics centers in the 2022-23 academic year.

The Project ECOAir team still cannot believe how far they have come but are excited about the opportunities in front of them. 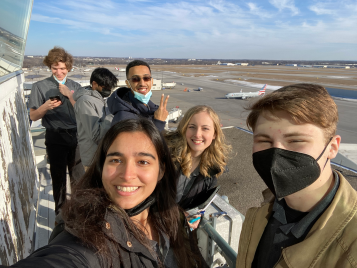 “It still is crazy to believe that we made it this far in competition. This project started out as an exciting brainstorming session, when we realized there were so many topics we could consider when deciding factors that would go into our design. We put everything we had into this project and worked really hard over several months to learn as much information as possible,” Herrmann said. “When we submitted our concept in March, we all agreed that no matter the results, our work had been extremely beneficial in terms of knowledge we gained along the way and the experience that had real-world applications within our major. Then, learning that we were actually invited to a major NASA center for our work was unbelievable and an incredible opportunity that we could not be more excited for.”

A quasiparticle that can transfer heat under electrical control