Winners were announced by AIAA on April 20. Across all AIAA regional student conferences more than 170 papers were presented by university and high school students across all six regions, with over 500 students and professionals in attendance. 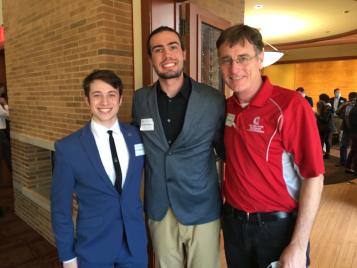 DeFranco and Chandler’s paper titled “Practical Investigation into the Diffusion Bonding of 316L Stainless Steel with Boron Carbide” won third place in the Undergraduate Category. Their advisor was Dr. John Horack, a professor at the Center for Aviation Studies.

Their research focuses on finding a way to bind 316L stainless steel with boron carbide, a first-of-its-kind bond between the two materials. It is just one small sub-part of the research currently being conducted for the NTP Group directed by Dr. John Horack and done in collaboration between The Ohio State University, BWX Technologies, and NASA.

“Being recognized at this event was a truly uplifting and phenomenal experience,” DeFranco said. “Throughout this research project, numerous hurdles had to be overcome, and Calvin Chandler and I spent many long days/nights working to ensure the project's completion. With that said, it was nice being recognized for the hard work we put into it and has definitely inspired me to continue conducting research in the future”

Their research set out to optimize the cooldown phase propellant flow of a nuclear thermal rocket engine by using classical control theory. This research will provide insight into low-cost solutions for the next era of nuclear propulsion rocket systems.

“It is an honor. Our team did not necessarily expect to place up until the moment we heard our names called,” Giancola said. “It was very exciting in the moment and will be a wonderful item for resumes and LinkedIn profiles, long-term. Recognition we received is perhaps the most important part of the award.”

The third-place team in the Teams Category was made up of Joseph Januszewski, Raghav Bhagwat, Brandon Chamberlain, Chris Petrilla, Andrew Robinson and John Horack. Their paper was titled “Investigation of Flow Control for a Piston Positive Expulsion Bipropellant Tank”.

“It feels good, but this was never the end goal that we set for ourselves back in August when we first started this capstone,” Januszewski said. “We set our initial research goals early on and had the mindset of wanting to attain these long-term goals. Along the way, we continuously learned and expanded our engineering skillset. We always tried to put forth our best work and well, the recognition just naturally came along with it. It just shows that if you put your mind to something, you can achieve great things, and this is only the beginning for all of us.”