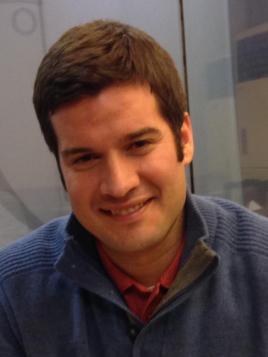 Carlos Castro, associate professor of mechanical and aerospace engineering, was elected this week into The American Institute for Medical and Biological Engineering (AIMBE) College of Fellows.

As an AIMBE Fellow, Castro joins 2,000 outstanding bioengineers, entrepreneurs and innovators who have distinguished themselves through significant and transformative contributions in research, education and industrial practice. Fellows represent the top two percent of the medical and biological engineering community in the country.

Director of the Nanoengineering and Biodesign Lab, Castro was nominated, reviewed and elected by peers and members of the College of Fellows for outstanding contributions to the development of DNA nanotechnology for biophysics, bioengineering, and biomedical applications.

His research focuses on the self-assembly of DNA nanodevices for biophysical and biomedical applications. Castro’s laboratory has pioneered the use of engineering mechanics and design approaches for the development of DNA nanomachines with complex motion, dynamic behavior, and programmed stimulus response. A major goal of his current research is to develop nanodevices for measurement, manipulation, and drug delivery in biological systems. He leads an interdisciplinary team recently awarded a $2 million grant from the National Science Foundation (NSF)Emerging Frontiers in Research and Innovation program for their work with DNA origami tools.

Castro earned both his Bachelor’s and Master’s degrees in mechanical engineering at Ohio State and his PhD from the Massachusetts Institute of Technology. He was post-doctoral fellow at the Technische Universität München working in structural DNA nanotechnology. His accolades include an NSF CAREER Award, a Fulbright Research Scholar Award and a College of Engineering Lumley Interdisciplinary Research Award.