MAE Professor Bharat Bhushan has been awarded the Tribology Gold Medal Award by the International Tribology Council (ITC), for lifetime outstanding and supreme achievements in the field of tribology.

Tribology is the study of friction, wear, lubrication, and the design of bearings and the science of interacting surfaces in relative motion. The Tribology Gold Medal was presented by Prof. Robert J. Young of Tribology Trust, Institution of Mechanical Engineers, U. K. at an Award Ceremony on July 14, 2022, at World Tribology Congress, Lyon, France.

The award is in recognition of his outstanding contribution to Tribology, with five decades of distinguished and continued contributions to the advancement of the field. His research contributions have significantly extended to the interdisciplinary areas of biological and materials science and he has pioneered the tribology of magnetic storage devices, bio-/nanotechnology, cosmetics and biomimetics, nanotribology, and green tribology

Dr. Bhushan is at present an Academy Professor at Ohio State. He has served as an Ohio Eminent Scholar, The Howard D. Winbigler Professor in the College of Engineering, Director of the Nanoprobe Laboratory for Bio- & Nanotechnology and Biomimetics, and affiliated faculty in John Glenn College of Public Affairs. He is considered as one of the pioneers of the tribology and mechanics of magnetic storage devices, nanotribology, ‘green’ tribology, cosmetic tribology, and biomimetics. He has authored 10 scientific books, over 100 book chapters, more than 900 scientific papers and 60 technical reports. 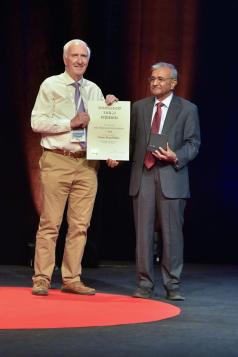 As well as receiving more than two dozen awards from professional societies, industry and U.S. Government Agencies, Bhushan received NASA’s ‘Certificate of Appreciation’ to recognize the critical tasks that he performed in support of President Reagan’s Commission investigating the Space Shuttle ‘Challenger’ Accident. He is also the recipient of various international fellowships including the Alexander von Humboldt Research Prize for Senior Scientists, the Max Planck Foundation Research Award for Outstanding Foreign Scientists and the Fulbright Senior Scholar Award.

His proud tribology moment was to teach a Tribology Course in 1999 as a faculty-appointed Guest Professor at the Cavendish Laboratory, University of Cambridge, UK - the home of the tribology pioneers F. P. Bowden and D. Tabor. 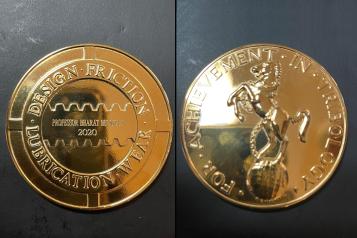 The Tribology Gold Medal was established and first awarded in 1972. It has been awarded to 48 individuals from 18 different countries. In 2020, the award was given to Dr. Bharat Bhushan, an American Tribologist/Scientist. He is the 11th American, the first since 2013.

The award ceremony will take place at UK Embassy in Washington, DC, to be hosted by British ambassador to the US. https://www.itctribology.net/en/awards/tribology-gold-medal/

A quasiparticle that can transfer heat under electrical control