A team of researchers led by faculty from Ohio State were recently awarded a $2 million grant from the National Science Foundation (NSF) Emerging Frontiers in Research and Innovation (EFRI) program for their work with DNA origami tools. The project titled “DNA origami tools to engineer chromatin structure and function in live cells” is directed by mechanical and aerospace engineering professor Carlos Castro, and physics professor Michael Poirier.

“This project is developing DNA origami-based nanodevices that target a specific gene within the cell’s genome,” said Poirier.

The grant is focused on developing DNA devices as tools to control cellular function inside live cell nuclei.

“In particular, we are developing devices that can target specific genes, turn on gene expression, and detect the RNA that is expressed,” said Castro. “We also plan to engineer these devices so the activation can be externally triggered, for example with a light input.”

The design of these devices will allow them to interact with genes, turning them on or off, nearly in real-time. They will also be able to monitor the activity of the gene. Poirier said that the tools that are being develop will provide insights into how intracellular uptake depends on various properties of DNA based nanodevices. The devices can also be applied in therapeutic measures, for example by delivering large RNA-protein complexes or inorganic particles.

“It will be interesting to discover how to effectively target DNA nanodevices to genomic locations,” said Poirier. “We anticipate a number of challenges along the way, but it is difficult to predict what they will be.”

One of the main challenges comes with the nearly endless possibilities of design. As the devices become more and more complex, the design grows increasingly complicated. This creates a challenge in assuring the devices are able to properly self-assemble. Other challenges include functionalizing the devices to homogeneity, and producing enough devices for cellular applications.

However, Castro and Poirier are not setting out to create DNA origami nanodevices from scratch. The two have been working together for over eight years. They previously received a grant from NIH for major instrumentation that will simplify their planned experiments by allowing them to combine molecular scale force measurements with high resolution 3D molecular and cellular fluorescence imaging.

Castro and Poirier also currently have another NSF grant to investigate in vitro studies of chromatin with DNA origami nanodevices. Poirier said that these have provided a key foundation for the current project.

The teamwork between Castro and Poirier brings together two departments at Ohio State: physics and mechanical and aerospace engineering. Poirier said that the collaboration between the departments is highly synergistic.

“In general, our collaboration is so successful because we have a unique combination of expertise and capabilities,” said Castro. 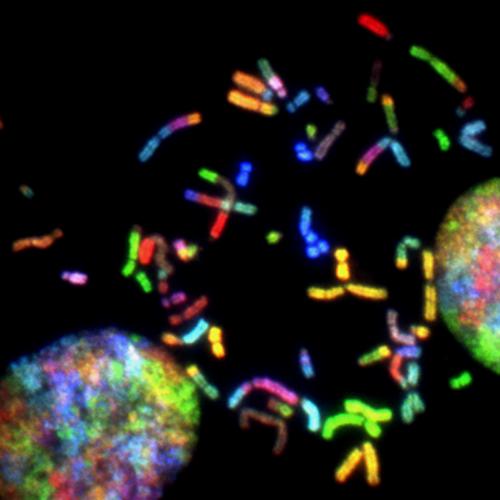 Poirier’s physics lab brings expertise in biophysics and biochemistry. This allows the team to study relevant biological systems like chromosomes. Castro’s mechanical and aerospace engineering lab has significant expertise in DNA nanotechnology. One of their main focuses is developing devices that can interfere with, manipulate and respond to biomolecules and other nanomaterials.

Together, the labs create a powerful combination. They possess the ability to not only develop nanoscale tools, but use them to study relevant biological systems using high end characterization methods.

The impact of Castro and Poirier’s research could further the understanding of biological systems and functions. Their research could shed light onto how the structure, mechanical properties and dynamics of chromosomes regulate gene expression and cell functions.

The extended impacts of this advancement in nanorobotics remains to be seen, but Castro and Poirier are hopeful that their research could be applied in a variety of disciplines.

“We are focused now on enabling new functions and capabilities,” said Castro. “In the future these devices and materials could have many applications in sensing, nanomanufacturing, and also in medicine.”

by Sam Cejda, Department of Mechanical and Aerospace Engineering