Dr. Karilyn Larkin is a hematologist at The Ohio State University Comprehensive Cancer Center – Arthur G. James Cancer Hospital and Richard J. Solove Research Institute. She and her colleagues were experiencing PPE shortages firsthand last month. She wondered if Ohio State engineers might be able to help—and she happened to know one. In her dual role as a College of Medicine assistant professor, she had been collaborating with Mechanical and Aerospace Engineering Professor Carlos Castro on leukemia research.

On March 21, she contacted Castro to ask about 3D printing face shields. According to infectious disease experts, face shields protect the face from fluids, spray, and droplets, while extending the life of N95 face masks.

Carlos Castro holds one of the molded visor parts coming out of the injection molding machine in the ISE manufacturing lab. “The answer was yes – Ohio State is full of collaborative people, and Carlos didn’t hesitate. He quickly secured support from college leadership, assembled a team and took action to figure out how the College of Engineering could do something to help healthcare workers – and do it quickly,” said Larkin.

While Castro’s research focus is DNA origami nanodevices for biomedical applications, he is surrounded by experts in prototyping and manufacturing in Scott Laboratory and other nearby engineering buildings. Furthermore, these experts have state-of-the-art equipment at their disposal for research and student projects, which largely came to a halt when campus was closed in mid-March.

Believing that the convergence of expertise, equipment and sudden availability could be a solution to local PPE shortages, Castro reached out to his colleagues and department chair, Vish Subramaniam. A design and manufacturing task force quickly took shape.

Student Shop Supervisor Kevin Wolf was Castro’s first call. “He oversees our department’s 3D printers for research projects, which I thought would be our best initial option for producing face shields,” Castro said. “Once he was in, the project started rolling.”

“The feedback was positive, and they suggested a couple modifications,” Castro recalled. “At that point we felt optimistic we could make something that could help keep healthcare workers safe.”

After maneuvering some material sourcing hurdles, Baumberger and Josh Wooten from the College of Nursing’s Innovation Studio led the laser cutting of clear shields. But Castro said they all soon realized the medical center’s needs would far outweigh the task force’s production capabilities. As revolutionary as it is, 3D printing is not a very scalable approach in terms of time required and cost of materials. “Even with three teams and 28 printers, it was likely we could have only produced around 100 per day maximum,” he said.

Within a few days, the elder Castro and Engineering Shop Supervisor Chad Bivens were running tests on injection molds. By April 6, they were producing injection molded visors in addition to 3D printing. A first batch of 312 fully-assembled face shields were delivered to the Wexner Medical Center on April 13. Since then, more than 2,000 have been delivered and are being used by Buckeye healthcare professionals. 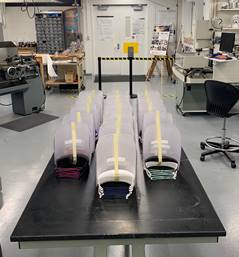 Complete face shields with 3D printed visors are ready for delivery after assembly in Scott Laboratory machine shop.The team can now produce over 400 face shields per day with the help of additional ISE and MAE staff members Rachmat Mulyana, Josh Hassenzahl, Bill Tullos, Chris Adams and Joe West. Upon learning of the College of Engineering’s capabilities, Columbus Public Health also requested shields. Castro said 600 were delivered this week, ramping up to a total of about 3,000 over the next three weeks.

“This has been a true interdisciplinary team effort with important contributions from faculty and many staff members,” said Castro, “and it sparked a realization within Engineering that we could provide rapid support for our healthcare colleagues in tangible ways.” Recently, engineers at the Center for Design and Manufacturing Excellence and Institute for Materials Research began leading production of COVID-19 test kit nasal swabs for the state of Ohio.

Other universities are responding in a similar fashion, but each problem and solution are unique to their regions. Although the phrase “think globally, act locally” is most often associated with environmental conservation, the actions it describes occur every day throughout the U.S. in the fight against COVID-19.