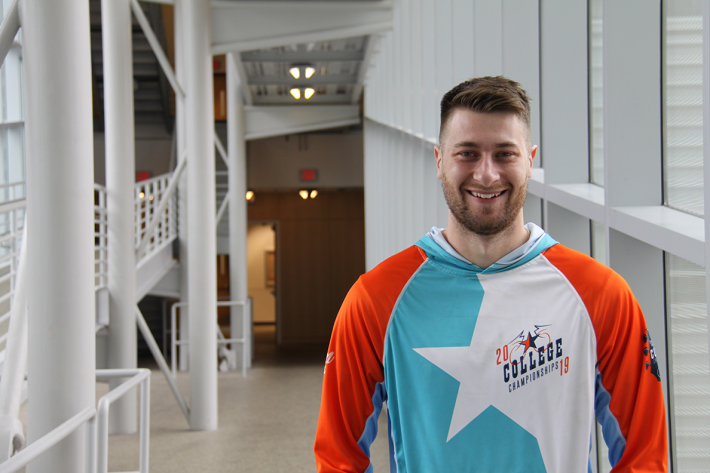 Where is your hometown?

What made you go into MAE, specifically nuclear engineering?

“I always just kind of thought it would be something interesting or unique. It was definitely one of the smaller options. For undergrad, I was actually in engineering physics so still within engineering, but with engineering physics, you could specialize in one of the engineering routes. So, I could specialize in nuclear and take nine to 10 courses or if I went into mechanical with a minor in nuclear I only have to take like four or five. This allowed me in undergrad to take more nuclear classes and get a feel for what it really was before going into grad school.”

Were you thinking nuclear engineering as a career path when you were first coming to OSU?

“I really wasn’t too sure. I was engineering-undecided when I was coming in and then once I was here I was like, ‘okay, let’s find that can be applicable.’ I enjoyed physics and engineering, but didn’t want to become one of a ton of mechanical engineers, so I kind of wanted a focus. I found that I had always had an interest in nuclear, as an energy source and things like that. Actually, in middle school, we had a debate where we were each assigned a specific energy source and had to look into the pros and cons of it and ever since then I had a little bit of interest in it.”

What brought you to Ohio State?

“I was born and bred to be a buckeye. All four of my grandparents went here, and I would grow up watching all of the games. My grandma had a buckeye tree in her yard and we would always collect the buckeyes and she’d make the necklaces and things like that. For undergrad, I literally applied to two schools: Case Western and here. It was the clear choice to come here.”

What do you like most about the major and the opportunities that Ohio State allows you as an engineering student?

“Ohio State with as big of a school that it is within even a large major like mechanical or aerospace engineering. The campus was as big or as small as you wanted to make it. You would eventually break into these smaller classes where a lot of the nuclear ones were anywhere from like eight to 20 people. You would have these small classes where you would see the same people over and over again and get used to seeing the same people. The flexibility of having Scott Lab as like a main campus area, but then having all of these other opportunities around us whether it was collaborating with people in the electrical department or the material science department, or even the fact that being a larger campus, -we have a reactor on campus that a lot of people don’t know about. It is really cool to get go see and do experiments with and get to know and learn from the reactor staff since they are a very cool group of people. A big school like Ohio State also draws a lot of attention on itself whether it be for research opportunities with other national labs or other universities. It really helps a lot to be at a bigger school like this.”

What is your favorite class you have taken at Ohio State and why?

“I really like the radiation detection and measurement class that my advisor, Dr. Cao, taught was really interesting because it applied some of the physics background that I have from undergrad, but then showed some real-world applications of hands-on work in the lab of like this is a detector and this is a radiation source, how you need to hook them up electronically and the software that you need to read out the specter that you collect. It was a good basis of showing the actual physics understanding of what is going on and the interaction of the radiation with the detector material. Then also, getting to go into the lab and get use of the reactor and seeing hands on. This is how the set up needs to go and this is what the experiments need to look like, so it was a good mix of in-class opportunity, but also opportunity in the lab to see what actually goes on.”

What would you say to a high school student coming to Ohio State to study engineering?

“Like I said earlier, as big as Ohio State is, it can be pretty daunting, but once you get into the classes and talk to your professors and the students around you, you can make it as big or as small as you want to. Like if you want to find a core group of friends to do homework with or labs with or possibly go into research with, you can do that and then stick with those same people throughout your time here. I mean I have been here for eight or nine years now, and I had some friends that I met in undergrad later on like junior or senior year that continued on into the nuclear program doing research and have been friends with them ever since. It will take the time and the work, but with having so many people in the classes, there are so many people you can study with, do homework with and learn from each other and interact through that.”

If you have been given an elephant and you can’t give it away or sell it, what would you do with the elephant?

“I would keep it as my pet, I guess. I would find a big enough space to house it and try to teach it the tricks where they have the elephant painting things or something like that. I don’t know just interact with it. I know elephants are quite intelligent creatures so if I could get it to trust me enough to interact with it and get close to it on a daily business. I think that would be really cool.”

Undergraduate program rankings on the rise