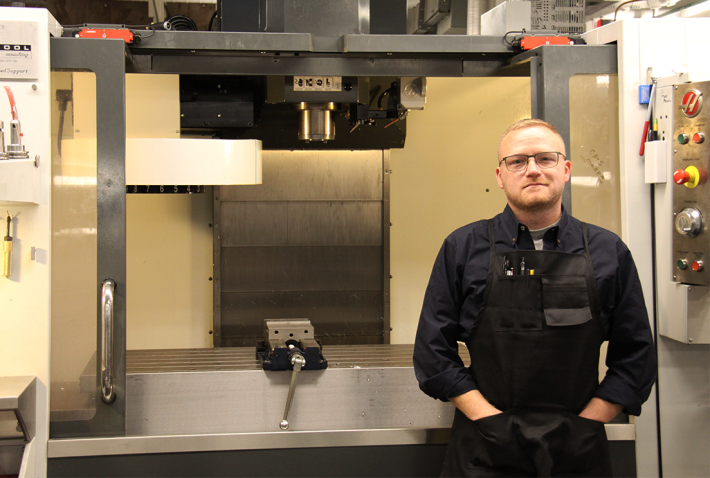 Where is your hometown?

“I am from a town called West Milton, Ohio. I know nobody has ever heard of it so when people ask me where I am from I just say the Troy area.”

What is your field specifically and what made you pursue it?

“I started at Sinclair Community College in Dayton. The program was called Projects Step II.  It was an intense one-year long program to become a toolmaker. Growing up in the Dayton area where manufacturing was prevalent, many of my friend’s parents worked at some of the larger companies and the ones who made a very good living were always in skill trades. It seemed like a good path for me.  While I was in the program, I got a job with a company offering a state-approved apprenticeship. After 4 and a half years, I graduated that and earned my journeyman certification as a mold maker.  Making plastic-injection and rubber-injection molds mostly.  I enjoyed the prototyping more than anything.  Designing and building something is very rewarding. I continued to take courses related to the industry and after about 8 years, I attended the Top Gun Tooling and Machining Academy.“

What brought you into education then from that?

“I eventually ended up in an administration role for about 6 years but I wanted to get my hands dirty again. I missed it. This position opened up and even though the salary was quite a bit lower than industry, I felt the work was important and would be rewarding. To me, it just seemed like a really good fit.  I didn’t realize at the time how rewarding it was going to be for me.  Since the time that I was hired, the type of projects we work on has grown to a huge variety. We get to teach students and help them prepare for industry. A lot of the young engineers that I worked with while in industry didn’t have the practical experience and those are skills we can give them that would otherwise take years of experience to gain depending on the type of position they accept when they graduate.”

What is your specific role and what is the impact of it?

“Experiential learning is the term that the university uses for us. Being young engineers, they are tasked in their courses to come up with certain projects and ideas. Be it capstone or some of the student-led groups out at CAR or BSLI, for example. The use of SolidWorks is there but the understanding of how to design something for manufacturing really isn’t. A lot of what I spend my time doing is working with these students on their designs and often end up making the more difficult parts for them. Starting with the requirements of the design, budgeting, limitations of the equipment available to them all the way to completion. I believe the impact we have on students is extremely important for their success.”

What would you tell a prospective student coming into mechanical or aerospace engineering?

“It is going to be a lot of hard work, time and effort. But at the end of the day if you put the work in now you’re not going to regret it. Work hard now, play hard later kind of thing.”

“The interaction with the students and researchers. There is something really great about designing something and making that design a reality. I get to be part of that. I get to work with researchers from many different departments and the variety of work never gets old to me.”

What advice would you give to a student who was about to leave school and start in the industry?

“I think the advice I would give to a young person just graduating college would be to definitely be open minded and respect those who have been in the industry because they are going to learn a lot from them. When you get out there, understand that you might not be doing exactly what you dreamed about doing. You have to put in your time to get there. Just be patient and learn everything you can along the way. Don’t live to work. Work to live. Find a balance between work and your personal life you find fulfilling”

What is the coolest or most interesting thing you have made in the shop?

“To me, it is a two-way tie. But there have been so many. These two are just what come to mind at the moment.  Working with Andrej (3D printing tissue inside the body during minimally-invasive surgery) on his project was probably one of the coolest ones because what we actually had to make was so complex. It was challenging and when it was done, very rewarding.  As far as one of the projects that I just love is, Megan Heitkemper’s in biomedical engineering. I have been working with her for a few years.  One of her projects is fetal heart valve research. The end goal is to be able to repair birth defects prior to birth.  This would prevent so many children from having open heart surgeries before they can even walk.  Things like that are big for me.  But again, I get to work on so many amazing things, they are all rewarding in one way or another”