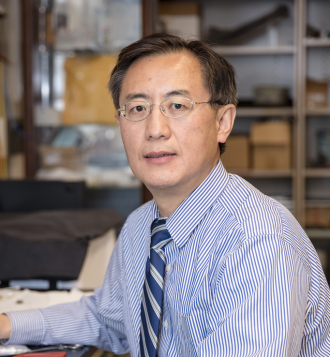 Nuclear engineering research in the Department of Mechanical and Aerospace Engineering is expanding its reach. Professor Raymond Cao will lead a $1.05-million project funded by the United States Department of Defense aimed at using solar panels to detect nuclear detonation.

The project—“Solar Panel for Prompt Detection and Identification of Nuclear Detonations”—will investigate the capability of photovoltaic panels in detecting, measuring and defining the characteristic prompt signatures of a nuclear detonation. The United States Department of Defense’s Defense Threats Reduction Agency is funding the investigation.

The project will examine whether high-energy radiation particles emitted following the initial detonation of a nuclear warhead can be detected by photovoltaic panels.

Cao, who directs Ohio State’s Nuclear Analysis and Radiation Sensor Laboratory and Nuclear Reactor Labortory described the significance of the project. “Manufactured infrastructures, such as solar plants or even portable solar panels, might be well served for the purpose of capturing the enormous energy released by a nuclear detonation,” he said. “In many aspects, the way a solar cell converts sun light to electricity is very much like how a semiconductor device detects nuclear radiation.”

Research partners are the University of North Carolina at Chapel Hill and the Air Force Institute of Technology.