Sparking a collaboration between U.S. and Chinese space exploration leaders 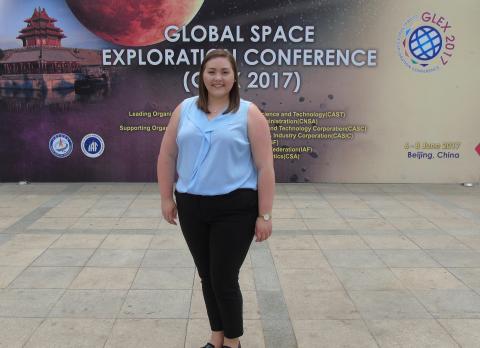 At the Global Space Exploration Conference, Kayleigh Gordon, an aerospace engineering graduate student, was involved in international discussions about the next generation of space innovations.

This summer, the 2017 Global Space Exploration (GLEX) Conference brought together top scholars and decision-makers from the aerospace policy and research community, including MAE student Kayleigh Gordon. The annual meeting drew engineers, scientists, entrepreneurs, educators and agency representatives to Beijing, China, with only one thing on their minds: advancing space exploration.

“Throughout the week, I was able to attend plenary programs that highlighted the current developments and prospects of China’s activities in space,” said Gordon, who is pursuing a master’s degree in aeronautical and astronautical engineering. “I was also able to sit in on keynote lectures from international space agency heads and astronauts.”

Gordon learned first-hand how nations around the globe are working together to develop the next generation of space innovations. The conference, which was sponsored by the International Astronautical Federation in collaboration with the Chinese Society for Astronautics, hosted sessions that explored future missions to low Earth orbit, the moon and beyond.

The conference tied in perfectly with her own research interests investigating the technical capabilities of Chinese space launch vehicles. Due to the National Aeronautics and Space Administration (NASA) being prohibited from collaborating bilaterally with China, Gordon has her sights set on scholarly partnerships with the country.

“I think that one way for the United States and China to work together to advance space flight is by working in conjunction with European space agencies for future research and missions,” Gordon added.

This August, she will continue working with her advisor Professor John M. Horack, Neil Armstrong Chair in Aerospace Policy, and Elizabeth Newton, who directs the Battelle Center for Science and Technology Policy. Their work at the Battelle Center will further her exploration of Chinese space launch vehicles.

“The objectives for attending GLEX are to learn more about the Chinese space program through the plenary programs and to develop connections within China’s astronautical organizations,” said Gordon.

She hopes that the connections she’s made through GLEX will benefit the Battelle Center as it develops the first-ever Conference for Sino-American Cooperation in Outer Space, which will take place in summer 2018 at Ohio State. In addition to learning more about potential partnerships between the two nations, event participants will gain a better understanding of the importance of space exploration in Chinese culture.

“Collaborating through academic mediums will allow the U.S. and China to share research, already collected data, and ideas for future missions so that hopefully one day the two nations can work together on a national level to advance space flight for the entirety of humankind.”

Statement from the Chair: We must change

How our faculty adapted to COVID-19in the classroom
More News