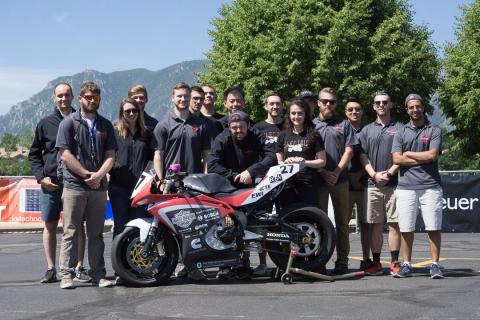 Buckeye Current and their professional rider, Rob Barber, finished with a time of 10:55.500.

“While the time is still short of the team’s goals, the results speak for themselves and Rob’s grin coming down the mountain was a testament to the bike’s performance on race day,” said team leader Polina Brodsky, a graduate fellow in the Department of Mechanical and Aerospace Engineering.

Barber, who has been with the team for five years, already has his name in the record books for having won the first ever electric bike race on the Isle Of Man TT Course in 2009, and is the first rider to win at both the TT Races and Pikes Peak.

“I have to confess coming back down I did shed a little tear inside my helmet,” Barber said. “I'm so proud of my Ohio State team, they really do deserve this win as they work so hard and we have just been plagued with bad luck. But their never give up attitude paid off."

The team's professional rider, Rob Barber, at the starting line. During the practice days leading up to the race, the team overcame fog delays and a broken down cargo van to continuously shave seconds off of their time. As a result, the team placed 11th overall—gasoline-and electric-powered motorcycles—and improved their time by 20 seconds. Last year, the team finished 16th overall. This is the third consecutive year the team has competed on the iconic mountain.

“Since the start of the year, the team has put incredible effort into improving the motorcycle design and addressing the technical issues that we had in the previous seasons,” said Marcello Canova, team faculty advisor and assistant professor in the Department of Mechanical and Aerospace Engineering. “At Pikes Peak, the Buckeye Current team has not only achieved prestigious victories on one of the most difficult courses in the world, but has set very strong foundations for the future, in terms of design processes, leadership and organizational skills."

Buckeye Current is a student team at The Ohio State University based at the Center for Automotive Research and advised by Marcello Canova, assistant professor in the Department of Mechanical and Aerospace Engineering. The team researches, designs, builds and races electric motorcycles to not only create innovative electric vehicles, but also to educate both students and the community about green technologies.

The team’s first bike, RW-1, set the East Coast Timing Association record for electric motorcycles at 144.3 miles per hour. Buckeye Current’s second bike placed third in the Isle of Man TT Zero 2013, an international all-electric series, and their third bike placed third the following year to defend that podium finish. In 2015, RW-3x changed pace and competed at the Pikes Peak International Hill Climb for the first time, and placed second in the electric modified class. They returned in 2016 and left with a third place finish.

To read more about the team and to follow its progress, visit current.osu.edu.

- Originally published by the College of Engineering

Office of Diversity and Inclusion Hall of Fame Award Nominations