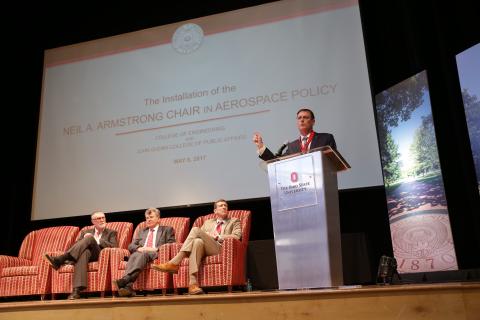 Established on the 50th anniversary of Senator John Glenn’s flight in Friendship 7, the Neil A. Armstrong Chair in Aerospace Policy will become the link between aerospace policy and aerospace engineering at The Ohio State University.

John M. Horack, Neil A. Armstrong Chair in Aerospace Policy and professor of aerospace engineering (second from right) with David B. Williams, dean of the College of Engineering (second from left); Bruce A. McPheron, executive vice president and provost (left); and Trevor L. Brown, dean of the John Glenn College of Public Affairs (right). Photo credit: Kevin Fitzsimons, University Communications.Professor John M. Horack was installed as the inaugural Armstrong Chair in Aerospace Policy on May 8, 2017, at the first-ever Armstrong Space Symposium. Propelled by a generous investment from Huntington Bank, this position shows that space exploration is indispensable to our lives.

For Horack, there wasn’t a time in his life when he wasn’t interested in spaceflight.

“I have always found space compelling, awe-inspiring, and it just pulled me in,” he said. “By the time I was in fourth grade, and probably earlier, I knew this was the direction I wanted to go.”

Horack has been a leader in aerospace innovation since 1987. At the National Aeronautics and Space Administration (NASA), he moved his way up the ranks from an assembly, test and calibration scientist to the manager of the Science and Mission Systems Office at the Marshall Space Flight Center. Horack’s groundbreaking research explores gamma ray bursts – hypernovas that emit as much energy in 10 seconds as our sun will release in its entire lifetime. After NASA, he went on to serve as vice president of research at the University of Alabama and then vice president of Teledyne Brown Engineering’s Space Systems group.

Today, in addition to his role as Armstrong Chair and professor of aerospace engineering, Horack serves as a board-level executive for the International Astronautical Federation. As a leader in the world’s largest organization of space professionals, Horack works to ensure that space and its benefits are open to everyone, regardless of gender, generation or geography.

“Space is not a luxury anymore - it is a necessity, woven into our everyday lives. And this means everybody,” he said.

“Today, space exploration profoundly impacts our quality-of-life, and that of every other human being on Earth,” said Horack. “Space has gone from being an immensely competitive national activity of singular accomplishments, to being a collaborative, international enterprise, essential to nearly every facet of our daily lives.”

During the event, one theme reigned supreme: the similarities between Horack and Armstrong were abundant. Both are modest, multi-talented and exceptional leaders.

“John is certainly one of the most enthusiastic people that I know,” said Michael D. Griffin, CEO of Schafer Corporation and the symposium’s keynote speaker. “As with many other Midwesterners, he’s understated. He is, in every way, the embodiment of Neil. Honest and determined.”

As Executive Vice President and Provost Bruce A. McPheron installed Horack as the inaugural Armstrong Chair in Aerospace Policy, he said, “It is certainly fitting that this chair is named in honor of Neil Armstrong and his historic first step on the moon.

“[John has] a tall order: the execution of original scientific and engineering research, public policy research in space, student education, and connecting the policy and technical aspects of spaceflight. In doing so, John will move Ohio State forward to prominence in the global spaceflight community.”

Statement from the Chair: We must change

How our faculty adapted to COVID-19in the classroom
More News