New faculty are innovators in teaching and scholarship 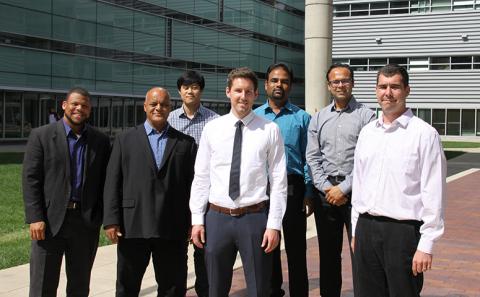 The Department of Mechanical and Aerospace Engineering (MAE) continues to build on its research strengths with the addition of eight talented new faculty.

David Hoelzle joins The Ohio State University as assistant professor.  He received MS and PhD degrees from the University of Illinois at Urbana-Champaign in mechanical science and engineering and a BS degree from Ohio State in mechanical engineering.  Hoelzle completed a postdoctoral degree from the Department of Integrative Biology and Physiology at the University of California, Los Angeles.  Prior to joining Ohio State, he was assistant professor in the Department of Aerospace and Mechanical Engineering at the University of Notre Dame.  His research interests include applied control theory and dynamics for applications in additive manufacturing robotics and microsystems for mechanobiology.  Hoelzle is a recipient of the 2016 National Science Foundation (NSF) Early CAREER Award and the 2016 Society of Manufacturing Engineers Outstanding Young Manufacturing Engineer Award.

In June 2016, Ohio State announced the appointment of Dr. John M. Horack as inaugural Neil Armstrong Chair in Aerospace Policy, holding a joint appointment with the College of Engineering, MAE and the John Glenn College of Public Affairs.  The Neil Armstrong Chair supports intellectual thought and political leadership in aerospace policy and pioneers preeminent research and student learning in this field.

Horack was previously Vice President of Space Systems at Teledyne Brown Engineering, Inc. with responsibility for overseeing all government and commercial space programs.  Prior to that, he served as Vice President of Research for the University of Alabama at Huntsville (UAHuntsville) where he had fiscal oversight for the university’s research enterprise including 14 research centers and laboratories with annual research expenditures of nearly $100 million.

Horack had an impressive career at NASA’s Marshall Space Flight Center (MSFC), having achieved the level of senior executive service. He is a widely-published scientist in the field of high-energy astrophysics, gamma-ray bursts and instrumentation.  Today, Horack serves as one of twelve vice presidents of the International Astronautical Federation; one of only two Americans serving in that capacity.  Horack graduated Phi Beta Kappa from Northwestern University with bachelor’s degrees in physics and astronomy.  He earned MA and PhD degrees in astrophysics from UAHuntsville.

Jhemi has more than 10 years of experience in the aerospace industry where he worked primarily on space systems and helicopters. During his tenure in industry, Jhemi gained extensive experience in vehicle modeling, control law design, guidance algorithms, navigation, hardware in the loop simulation, flight performance, handling qualities evaluation, system identification and testing and validation. He taught courses at the undergraduate and graduate level at the American University of Sharjah. At Ohio State, Jhemi’s teaching focus is in flight vehicle dynamics and design of space vehicle systems.

Dr. Jung-Hyun Kim is assistant professor of mechanical engineering and materials science and engineering.  He is also an Associate Fellow with the Center for Automotive Research where his work will uniquely focus on battery life extension with real world testing and validation.

Kim earned BS and MS degrees in chemical engineering from Hanyang University in South Korea, a PhD degree in materials science and engineering from The University of Texas at Austin and was a postdoctoral researcher at the Oak Ridge National Laboratory in Oak Ridge, Tennessee.  He worked for General Motors Global Research and Development Center in Warren, Michigan as a senior researcher, where his main role was developing next-generation automotive battery systems through collaboration with world-class scientists in universities, national laboratories and major chemical and battery companies.

Kim’s research interests are in materials and system development for automotive batteries, fuel cells and gas permeation membranes.  His research is focused on the bulk and surface characterizations of current Li-ion battery cells, identifying main degradation mechanisms and developing new materials that can innovate next generation battery systems.

He was the recipient of the Best Paper of Conference Award at the 2006 Astrodynamics Specialist Conference and received the 2007 American Institute of Aeronautics and Astronautics (AIAA) Open Topic Graduate Research Award.  More recently, he was a 2013 recipient of the NSF CAREER Award and received the Air Force Office of Scientific Research (AFOSR) Young Investigator Award in 2015.

Previously, Marzette was a research scientist with Battelle Memorial Institute in Columbus, Ohio for eight years.  In this capacity, he led interdisciplinary teams of analysts, designers, engineers and technicians through all phases of the project life-cycle from proposal and concept generation through design, fabrication, testing and evaluation.  Most recently, Marzette was a project engineer with Illinois Tool Works (ITW), a diversified manufacturer in Glenview, Illinois.

Marzette has won numerous honors and awards including the Distinguished Alumni Award, The Ohio State University Chapter of the National Society of Black Engineers in 2014 and Battelle’s National Security Global Business Unity President’s Award in 2013.

His teaching emphasis is in the area of mechanical design as well as continued development and refinement of the capstone program curriculum.  His current research interests include additive manufacturing as applied to aerospace, health and life sciences and electromechanical systems.

Vaibhav Sinha joins Ohio State as assistant clinical professor.  Sinha has more than 10 years of university research and teaching experience and has held various positions in the energy and aeronautics industries.

Sinha has contributed to research projects at the Missouri University of Science and Technology/ Missouri Science and Technology Nuclear Reactor in the areas of design and development of a novel neutron and x-ray combined computed tomography system (NXCT), installation and shielding design of neutron generator facility, and infrastructure upgrade of radiation measurements and spectroscopy laboratory. He also participated in a research project at the Idaho Accelerator Center for production of radioisotope Cu-67 by photon activation techniques using a linear electron accelerator.  Sinha was also involved in research at the Research Center Juelich, Germany for design and development of children calibration phantoms for assessment of radiation dose in infants and small children using mobile and whole body counters.

Dr. David Talbot joins MAE as assistant research professor.  He received a PhD in mechanical engineering from Ohio State in 2012.

The Graduate Specialization in Automotive Systems and Mobility: A Student’s Perspective