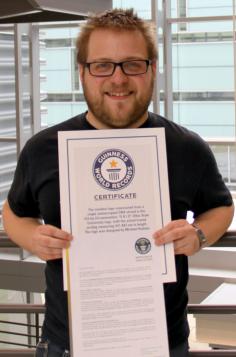 MAE PhD Candidate Mike Hudoba and his work creating Script Ohio from DNA origami is officially considered amazing and will be included in the 2016 Guinness Book of World Records published in fall 2015.  Hudoba was recently awarded a Guinness World Records certificate for his achievement in a previously nonexistent category – using biological materials to create the smallest logo ever made.

In 2011, Hudoba gave a presentation on his proposed research at the Dietz Lab at Technische Universitat Munchen (TUM) in Munich, Germany.  “I ended my presentation with an image of the marching band’s Script Ohio in Ohio Stadium,” Hudoba said.  “Almost jokingly, Hendrik Dietz said, “You should make that with DNA origami,” and the rest is history.” Hudoba  contacted Guinness World Records -- the primary international authority on the cataloguing and verification of a huge number of world records -- after presenting at a conference last summer, not expecting the overwhelmingly positive response by the publisher.

The Nanoengineering and Biodesign Lab in MAE focuses on developing novel tools and approaches to study biological systems at multiple lengthscales, ranging from the single molecule level to millimeter scale complex biological systems. A major focus of the lab is the development of nanoscale devices using programmed self-assembly of DNA.  Hudoba’s research uses DNA origami known to create nanoscale machines for probing and mimicking biological systems, controlling geometries at the nanometer scale.

“We design the DNA sequences and let nature take over,” Hudoba commented.  “We begin with a large piece of viral DNA (bacteriophage viral genome m13MP18) to build a scaffold.  We then design smaller strands (staples) to bind to the scaffold.  The staples cause the scaffold to fold into a three-dimensional shape, which is where the name origami comes from,” he said.

The natural shape of DNA is a double-helix that can be represented as a long cylinder.  Script Ohio was made by attaching six of the individual cylinders together to form a 6-helix bundle, then curving the bundle into the shape of the cursive text.  The design was modeled from the actual Ohio State Marching Band blueprint to get the shapes and sizes of the letters as accurate as possible.

Once designed and assembled, the Script Ohio could be viewed using a transmission electron microscope (TEM) from the Ohio State Campus Microscopy and Imaging Facility.

“It was actually a design challenge,” said Assistant Professor Carlos Castro, Hudoba’s advisor and director of the Nanoengineering and Biodesign Lab.  “It shows the amazing side benefits of what can be done with DNA origami.”

Asked what he said when he finished the project, Hudoba smiled.  “Go Bucks!