Abstract: Nanofluidics is a research field focusing on the study and application of unique fluid transport phenomena in/around nanosized objects, such as fast water transport in carbon nanotubes and single molecule/particle translocation through nanopores.  Benefiting from the nanoscale confinements and nanoscale surface-fluid interactions, these nanofluidic transport phenomena are significantly different from those at macro/microscale and they open up new avenues for both biomedical and energy applications. In this talk, I will present my group’s recent works on exploring new fundamentals and applications of three nanofluidic transport phenomena.  First, I will present our study of fast water transport in single graphene nanochannels which demystifies a long-lasting controversy about water slippage on graphene surface. Second, I will show how we explore kinetically-limited ultrafast water evaporation from single nanopores. I will demonstrate that the ultimate evaporation heat/mass fluxes from nanopores are diameter-dependent and the fluxes can exceed the kinetic limits predicated by the classical theories by an order of magnitude, offering unprecedented opportunities for electronic cooling and membrane distillation. Finally, I will introduce our latest work on electrokinetic trapping/capture of single nanoparticles near low-aspect-ratio nanopores and discuss the potential applications of this phenomenon on nanoparticle characterization as well as nanopore gating for controlled chemical releasing. 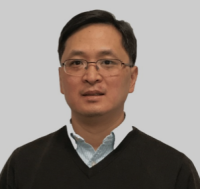 Bio: Dr. Chuanhua Duan received his B.S. and M.S. degrees in Engineering Thermophysics from Tsinghua University in 2002 and 2004, respectively. He obtained his Ph.D. in Mechanical Engineering from the University of California at Berkeley in 2009 under the guidance of Prof. Arun Majumdar. After staying in Berkeley for two more years as a postdoctoral researcher at the Lawrence Berkeley National Laboratory, Dr. Duan joined the Department of Mechanical Engineering at Boston University as an assistant professor in 2012. He is currently an associate professor at BU ME, leading the Nanoscale Energy-Fluids Transport Laboratory. Among his honors, Dr. Duan received the Defense Advanced Research Project Agency Young Faculty Award (YFA) in 2018, the National Science Foundation Early Faculty Career Development Award (CAREER) in 2017, and the American Chemistry Society Petroleum Research Fund Doctoral New Investigator Award in 2013. His research focuses on the study of micro- and nanofluidic transport phenomena and the development of new fluidic devices/approaches for applications in healthcare, energy systems, and thermal management.