A key challenge in nanotechnology is the precise fabrication of complex nanostructures and nanodevices, which can be used as general platforms for basic science research (e.g. materials science, structural biology, molecular biology, etc.), and for practical applications. Owing largely to its programmable design strategies, nucleic acids self-assembly, and in particular DNA self-assembly, has emerged as a powerful approach in programming self-assembly of custom-designed intricate nanostructures and dynamic nanodevices.

The core mission of our lab (ke-lab.gatech.edu) is to develop novel self-assembly strategies to realize the full potential of DNA as a programable nanomaterial. Our recent works focus on making massive/complex static DNA nanostructures and dynamic DNA devices. We invented a modular assembly strategy for constructing complex 3D shapes with rationally designed shapes, by using short synthetic DNA oligos — “DNA bricks”. We also developed many dynamic DNA nanomachines that can perform a range of controlled motions at nanoscale. Recently, we have demonstrated prescribed, long-range information relay in artificial molecular arrays assembled from modular “DNA domino”: Once initiated at a few selected units, the transformation then propagates to neighboring units and eventually the entire array. Beyond sophisticated nanostructures and nanomachines, DNA nanotechnology has found increasing capabilities in many applications. Our most recent works include DNA-templated self-assembly of new functional nanomaterials, DNA-based nanoscale drug delivery systems for cancer treatment, DNA nanodevices for the interrogation of cellular force generation and cooperativity between T-cell receptor and co-receptors. 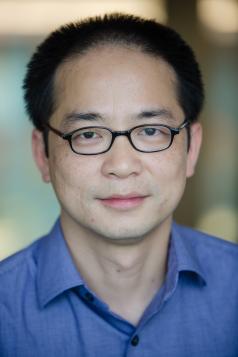 Yonggang Ke earned his Bachelor degree in science from chemistry department at Peking university in 1999. He received his PhD in chemistry from Arizona State University in 2009, under supervision of Prof. Hao Yan. Prior to joining Emory University, he had been a postdoctoral fellow in Cancer Biology at Harvard University from 2009 to 2014, working with Prof. William Shih and Prof. Peng Yin. From 2014 to present, he has been working in the Wallace H. Coulter Department of Biomedical Engineering at Georgia Tech and Emory University, as an assistant professor. Dr. Ke is one of the leading experts in DNA nanotechnology, and have published four papers in Science and one in Nature. His research focuses on programmable assembly of biologically inspired nanomaterials and to explore its applications in biomedical engineering, biomaterials, single-molecule biophysics, nanoplasmonics, and nanophotonics.